Life is a Beach 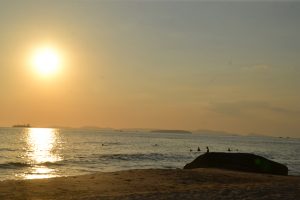 Sihanoukville is known to be Cambodia’s prime beach destination. During the weekends and public holidays many local people drive to the beach from Phnom Penh. They take on the four hours drive and nestle themselves on the beach chairs. Eating and drinking seems to be the most favorite activity. Most Cambodian people still have limited swimming skills. The Serendipity Beach is most popular by especially the local crowds. This is also the main beach of Sihanoukville where most bars, restaurants and entertainment can be found. Most foreign visitors like to venture a bit further and seek the tranquility of Otres Beach. For those who really want to get away and indulge in a tropical island life experience take the ferry to the Koh Rong archipelago.

Beach destinations can get overwhelming at times and when we visited Sihanoukville,

it was a public holiday. After spending a day on Serendipity Beach, we decided to get on our bicycles and head a bit further out. Otres Beach was our destination. Armed with our towel, sun cream and a sandwich we found ourselves a nice little spot under a tree, overlooking the Gulf of Thailand. Otres Beach did not have the masses like we encountered before. After a good swim and rest we decided to exchange the bicycle for a motorbike and head for Ream National Park. Despite the development in the park we could still easily find nice stretches of beach. The beaches of Ream were untouched and that no other person had made the effort to come to Ream. As development was indeed happening on the other side of the peninsula, we decided to relax the rest of the day all by ourselves on a Ream Beach, till sunset told us to go home.

On the second day we decided to take the ferry to Koh Rong. We heard much about Koh Rong and how peaceful and beautiful it would be there. After our ferry landed at the pier, we could not be happier. In front of stretched this enormous white sand beach, fish were clearly visible in the light blue waters and no traffic or noise other than the waves breaking gently in the bay. We found a shady spot, dropped or backpack, and ran into the sea like happy kids on Christmas morning. After a delicious lunch and a fresh coconut we decided to rent a boat and go around the bay for some snorkeling. Being on the boat allowed us to see the entire bay, a real sight for sore eyes. We had to conclude that people were right: Koh Rong and Koh Rong Samloeun are really amazing places.